From the Middletown Lions Club:

Like pancakes? Tired of everyone blaming everyone else for the state of the world? Want to be part of the solution?

You can step back or step up….In the end, it’s always up to each of us, there really is no “they,” “them” or “those people.” Just you and me.

Did you know that only 20% of people with intellectual disabilities are employed (even though many of the other 80% would love to work)? Well, the people at NO LIMITS CAFE do and they are doing something about it.

They are building a business that will train those with intellectual disabilities to work in the NO LIMITS CAFE. They will learn to cook, serve, operate the register, and any other job a cafe worker would do. They can do it. That’s not the problem. The problem is giving them the opportunity to do it. Giving them possibilities instead of look-away glances.

Follow the link www.nolimitscafe.org See the faces. They are waiting for the opportunity. The cafe is not ready yet: that takes money.

The Middletown Lions Club is sponsoring a Super Bowl Sunday Pancake Breakfast to support NO LIMITS CAFE on Sunday, February 3, from 8 to 10 am at Applebee’s Restaurant Middletown, Route 35 North at Middletown Road, $10 donation. There will be two door prizes: Tiki Barber Autographed Footballs

The Middletown Lion’s Club will be there. Will you? 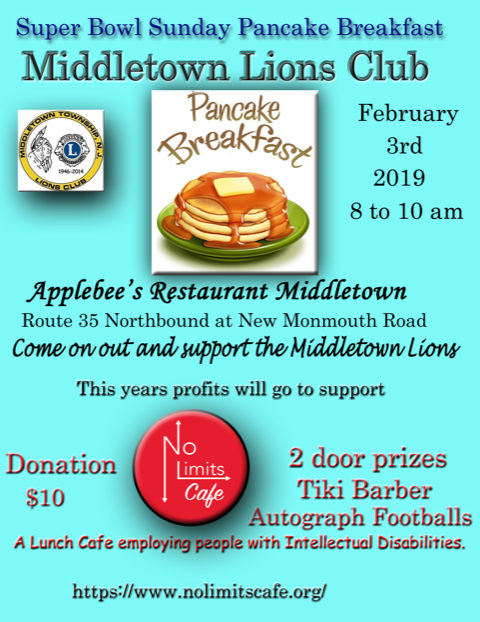